You are in [Themes] [Postal History] [Victorian Post Boxes]

Rowland Hill started the Penny Post in 1840. The first stamps were issued in May 1840 - the Penny Black Stamp and the Two Pence Blue.

Initially all post was handled through the Post offices alone, but by 1852 pillar boxes were being introduced. They had first been trialled on the Channel Islands where four cast iron pillar boxes were installed on Jersey in November 1852. The trial was extended to Guernsey in 1853. The trial was considered a success and postboxes started appearing on the mainland in 1853. The first postboxes were red, which sparked complaints that they were an eyesore in the countryside, so they were painted green. (By 1879 however, they had become such a part of daily life that people complained they couldn't see where they were, so they went back to being red - the standard colour ever since). 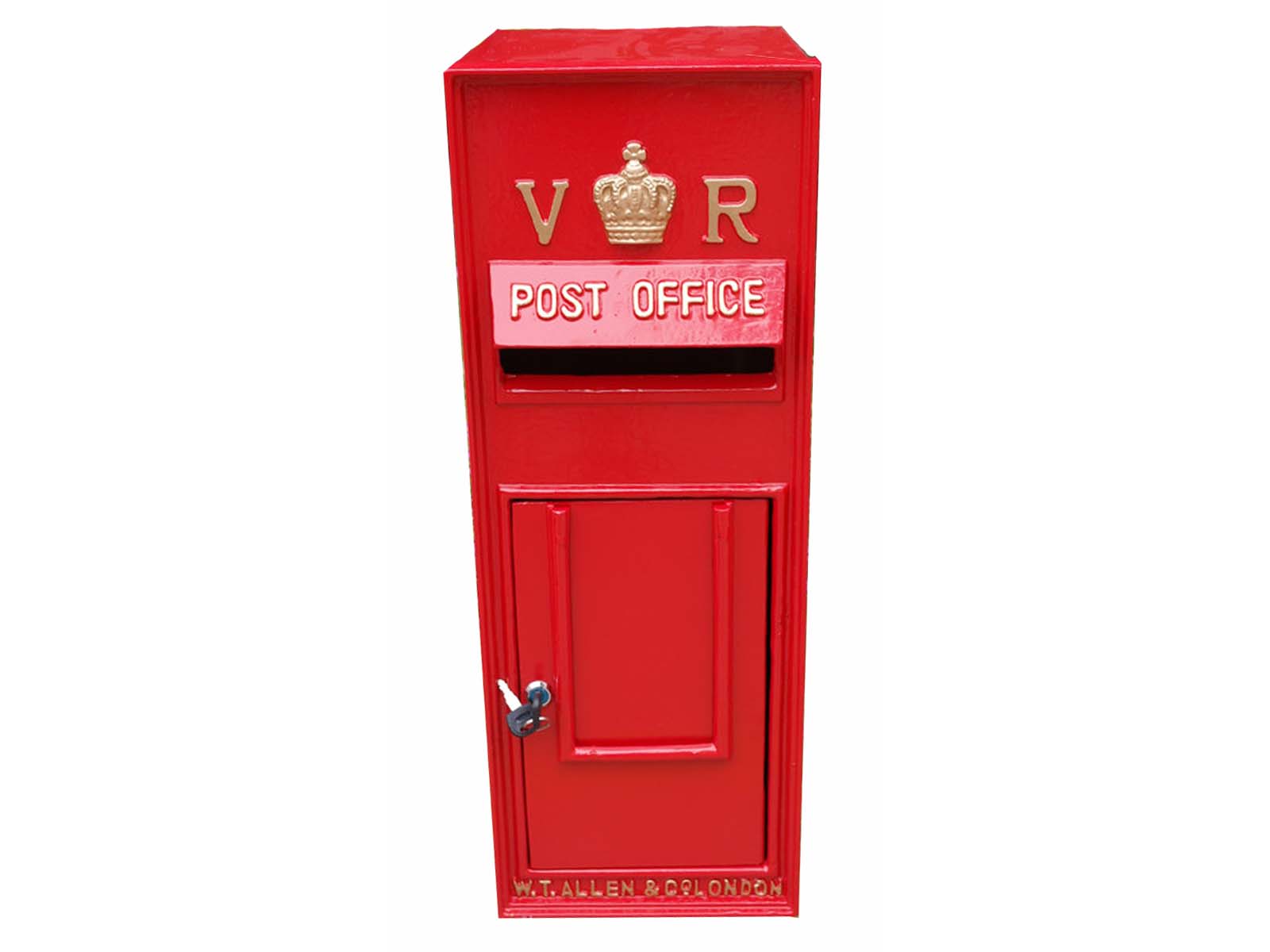 It rapidly became apparent that smaller letter boxes suitable for villages and other rural sites were needed to meet the growing demand from the public.The earliest specimen boxes were made for the surveyors of the Western District of England in 1857, and permission was granted for them to be sited in villages near Plymouth. None of these still exists.

Meanwhile an iron wall box was made by Smith & Hawkes for the Birmingham District, and after some improvements others were commissioned. They cost only a quarter of the price of pillar boxes, and 250 were made by September 1858.

Because this was a new invention, there were a number of design faults with the early Victorian boxes, and several changes were made over the next few decades. As rainwater was finding its way through the open mouth, a small pediment and hood was added over the aperture. Adjustments were made to the crown and cipher; a small door pull was added; the hood was enlarged; a collection plate was added (to show which was the next collection to be made); the aperture was made wider; the keyhole had a protective cover added.

The oldest wall box is at Charnham House, Charnham Street. This is a box made by Smith & Hawkes of Birmingham. It is a 'Number 2 (small) improved' wall box of 1861 design. The door has a door pull, and the collection plate is below the aperture. The wall box was originally in the wall of Stradling's Cycle Shop, close to the Wesleyan Church (see Photo Gallery).

In 1899, under Postmaster Joseph Mathews, the first Town Sub Office at 2 Oxford Street, Eddington was opened, on 10th April 1899 under a postmistress, Miss Mary Brothers. A wall box was placed outside.

In 1949 a survey showed that there were 100,000 letter boxes in service which had posting apertures less than 8 inches (200mm) wide. There was criticism from the public about the inconvenience of their continued use. By 1956 there were still 30,000 in use, mostly in rural areas such as Hungerford, and a plan was inaugurated to provide one wall box with a wider aperture in each village. This still left 5,000 boxes to be dealt with, so a contractor was engaged to modify the existing boxes in situ by cutting out the aperture and fitting a new casting over it. This was carried out between 1959 and 1965.

The Eddington wall box was modified in this way between 1959 and 1965.

The royal cipher and crown is at the top; the words 'POST OFFICE' are on the hood; the collection plate is mounted on the door in a beading rather than a recess, and there is provision for a 'NEXT COLLECTION' tablet in the top right-hand corner of the plate.

Sadly, the wall box was severely damaged when a lorry ran into it in December 2016. It proved irreparable, and was replaced by a modern box installed at near the Portdown flats, further east along Park Street. This was a great loss to Hungerford's heritage.

A further Victorian wall box was installed by the Post Office Authorities in the Croft, near the Railway Bridge in January 1892, but it no longer exists.

Victorian boxes, all marked clearly with VR (Victoria Regina) are now listed due to the efforts of the Pillar Box Society. 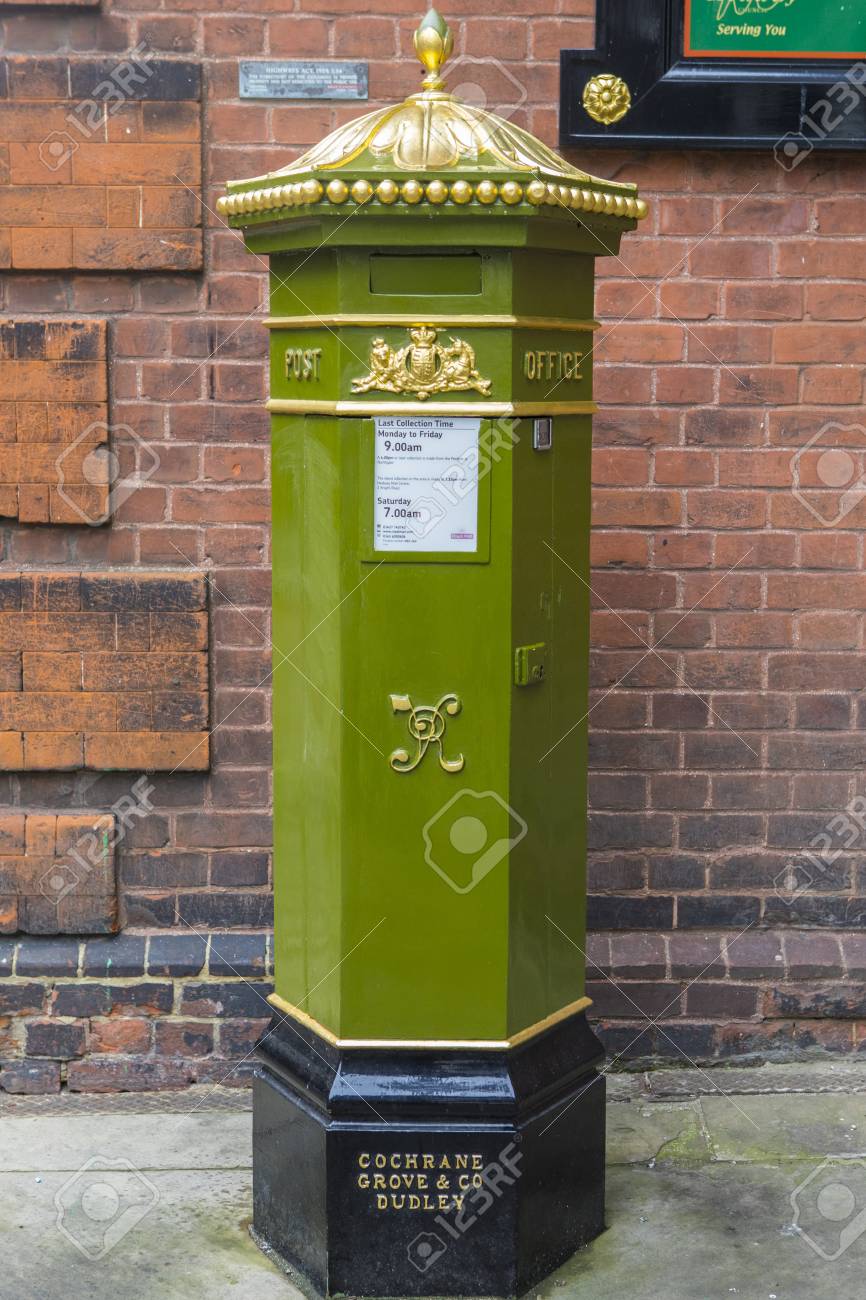 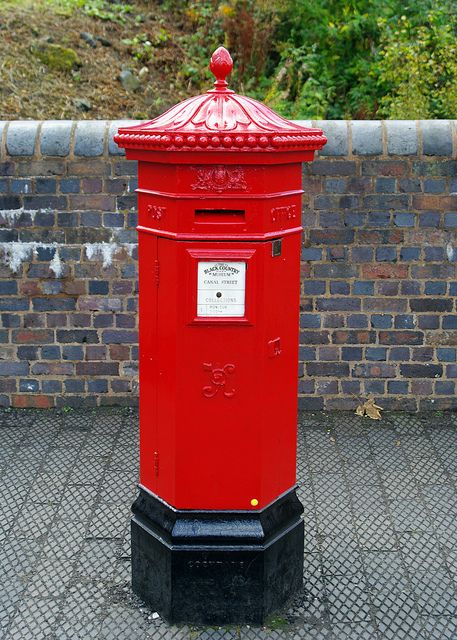 - Charnham House, Charnham Street. The oldest wall box in Hungerford - a 'Number 2 (small) improved' wall box installed 1877, made by Smith & Hawkes of Birmingham. Note the door pull, and the collection plate is below the aperture.

- Police Station, Park Street. A 'Small 'C' size' wall box, dating from post 1881, made by W.T. Allen & Co.
The royal cipher and crown is at the top; the words 'POST OFFICE' are on the hood; the collection plate is mounted on the door in a beading rather than a recess, and there is provision for a 'NEXT COLLECTION' tablet in the top right-hand corner of the plate.

- Oil painting of the Bear Corner and Charnham Street, c1900. Note the Victorian post box in the wall of Stradling's shop (not in Charnham Close asit is now). (With thanks to Dorothy Froom, Jun 2016).