A field-effect transistor or FET is a transistor, where the output current is controlled by an electric field. FET sometimes is called unipolar transistor as it involves single carrier type operation. The basic types of FET transistors are completely different from BJT transistor basics. FET is three-terminal semiconductor devices, with source, drain, and gate terminals.

The charge carries are electrons or holes, which flow from the source to drain through an active channel. This flow of electrons from source to drain is controlled by the voltage applied across the gate and source terminals.

There are two types of JFETs commonly used in the field semiconductor devices: N-Channel JFET and P-Channel JFET. .JFET is always operated with the gate-source pn junction reverse-biased.the gate current IG=0.Input resistance Rin = VGG / IG = infinitive ohm.Typical JFET has Rin is hundred of mega-ohm.JFET is in application where a high input impedance is required.one of the most importance of JFET is the source follower. 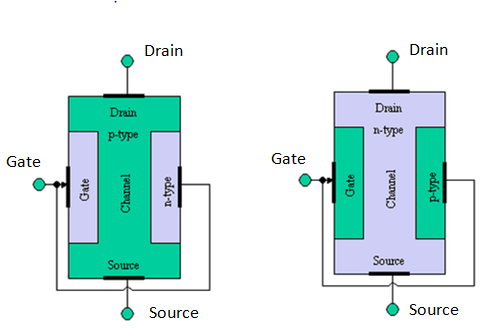 FETs are of two types- JFETs or MOSFETs.

The Junction FET transistor is a type of field-effect transistor that can be used as an electrically controlled switch. The electric energy flows through an active channel between sources to drain terminals. By applying a reverse bias voltage to the gate terminal, the channel is strained so the electric current is switched off completely.

The junction FET transistor is available in two polarities which are; N channel JFET consists of an n-type bar at the sides of which two p-type layers are doped. The channel of electrons constitutes the N channel for the device. Two ohmic contacts are made at both ends of the N-channel device, which are connected together to form the gate terminal.

Whenever a positive voltage is applied across drain and source terminals, electrons flow from the source ‘S’ to drain ‘D’ terminal, whereas conventional drain current Id flows through the drain to source. As current flows through the device, it is in one state.

When a negative polarity voltage is applied to the gate terminal, a depletion region is created in the channel. The channel width is reduced, hence increasing the channel resistance between the source and drain. Since the gate-source junction is reverse biased and no current flows in the device, it is in off condition.

So basically if the voltage applied at the gate terminal is increased, less amount of current will flow from the source to drain.

P channel JFET consists of a P-type bar, at two sides of which n-type layers are doped. The gate terminal is formed by joining the ohmic contacts at both sides. Like in an N channel JFET, the source and drain terminals are taken from the other two sides of the bar. A P-type channel, consisting of holes as charge carriers, is formed between the source and drain terminal.

A negative voltage applied to the drain and source terminals ensures the flow of current from source to drain terminal and the device operates in ohmic region. A positive voltage applied to the gate terminal ensures the reduction of channel width, thus increasing the channel resistance. More positive is the gate voltage; less is the current flowing through the device.

Given below is the characteristic curve of the p channel Junction Field Effect transistor and different modes of operation of the transistor.

Cutoff region: When the voltage applied to the gate terminal is enough positive for the channel width to be minimum, no current flows. This causes the device to be in cut off region.

Ohmic region: The current flowing through the device is linearly proportional to the applied voltage until a breakdown voltage is reached. In this region, the transistor shows some resistance to the flow of current. 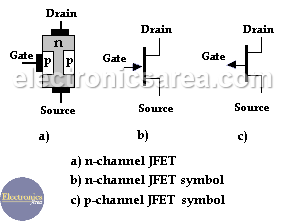 MOSFET transistor as its name suggests is a p-type (n-type) semiconductor bar (with two heavily doped n-type regions diffused into it) with a metal oxide layer deposited on its surface and holes taken out of the layer to form source and drain terminals. A metal layer is deposited on the oxide layer to form the gate terminal. One of the basic applications of the field-effect transistors is using a MOSFET as a switch.

This type of FET transistor has three terminals, which are source, drain, and gate. The voltage applied to the gate terminal controls the flow of current from source to drain. The presence of an insulating layer of metal oxide results in the device having high input impedance.

Types of MOSFET Transistor Based on Operation Modes

When a negative voltage is applied to the gate terminal of MOSFET, the positive charge carrying carriers or holes get accumulated more near the oxide layer. A channel is formed from the source to the drain terminal.

As the voltage is made more negative, the channel width increases and current flows from source to drain terminal. Thus as the flow of current ‘enhances’ with applied gate voltage, this device is called Enhancement type MOSFET.

A depletion-mode MOSFET consists of a channel diffused between the drain to the source terminal. In absence of any gate voltage, current flows from source to drain because of the channel.

Applications involving MOSFET as a switch

Controlling the speed of BLDC motor

MOSFET can be used as a switch to operate a DC motor. Here a transistor is used to trigger the MOSFET. PWM signals from a microcontroller are used to switch on or off the transistor.

A logic low signal from the microcontroller pin results in the OPTO Coupler to operate, generating a high logic signal at its output. The PNP transistor is cut off and accordingly, the MOSFET gets triggered and is switched ON. The drain and source terminals are shorted and the current flow to the motor windings such that it starts rotating. PWM signals ensure speed control of the motor.

Driving an array of LEDs:

MOSFET operation as a switch involves the application of controlling the intensity of an array of LEDs. Here a transistor, driven by signals from an external sources like microcontroller, is used to drive the MOSFET. When the transistor is switched off, the MOSFET gets the supply and is switched ON, thus providing proper biasing to the LED array.

We hope we have been successful in providing the best knowledge to the readers about the topic of field-effect transistors. We would like the readers to answer a simple question – How are FETs different from BJTs and why they are more used comparatively.

Please your answers along with your feedback in the comment section below. 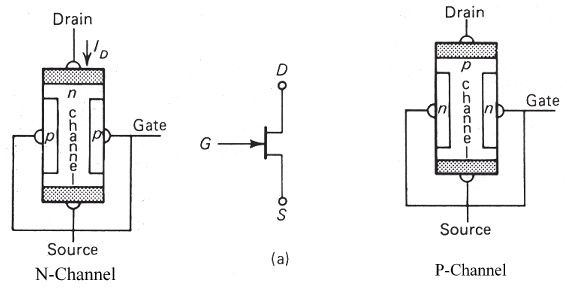