We just released a Feb. 5 '89 prototype of DuckTales for the NES!
If you'd like to support our preservation efforts (and this wasn't cheap), please consider donating or supporting us on Patreon. Thank you!

Super Mario Bros. Deluxe is, you guessed it, a remake of Super Mario Bros. and (most of) its Japanese sequel to the Game Boy Color. With the exceptions of an overworld map, a Challenge Mode, somewhat iffy physics, heavy screen crunch and some other tidbits, it remains very faithful to the original.

An unused level select for the For Super Players mode, judging by the 'MARIO 2' text, can be loaded by setting 0xFFB5 to 0x31 (or activate and deactivate GameShark code 0131B5FF).

It can load all the levels, including unused ones. You will start with 0 lives (though getting a game over will reset the lives counter to 5 while keeping Mario on the last played level) and can continue playing after the last level, with glitchy results. By default it will use the Super Mario Bros. level set.

There also does not appear to be a way to switch between Mario and Luigi on this screen, so to play as Luigi, select a level, lose a life, then press Select on the overworld.

Admit it, you laughed.

Worlds 9, A, B, C, and D of the For Super Players portion of the game are partially complete, but cannot be accessed by normal means. See the Notes page for a full list of differences and GameShark codes to access them.

Level Number: 20. The timer is set to 0 in Challenge Mode, meaning the level lasts indefinitely unless it is exited via the pause menu.

This simple level comes after 8-4 and before the 1-2 bonus area. It can be accessed by using GameShark code 012063C1 and entering any level in Original or Challenge mode.

The second single Brick Block from the left contains a Red Coin if the level is loaded in Challenge Mode, but collecting it will not cause the 'Red Coin collected' sound effect to play or add it to the Red Coin HUD. The Red Coin does give the player 200 points, however.

In the Japanese version, the first pipe contains a Piranha Plant. 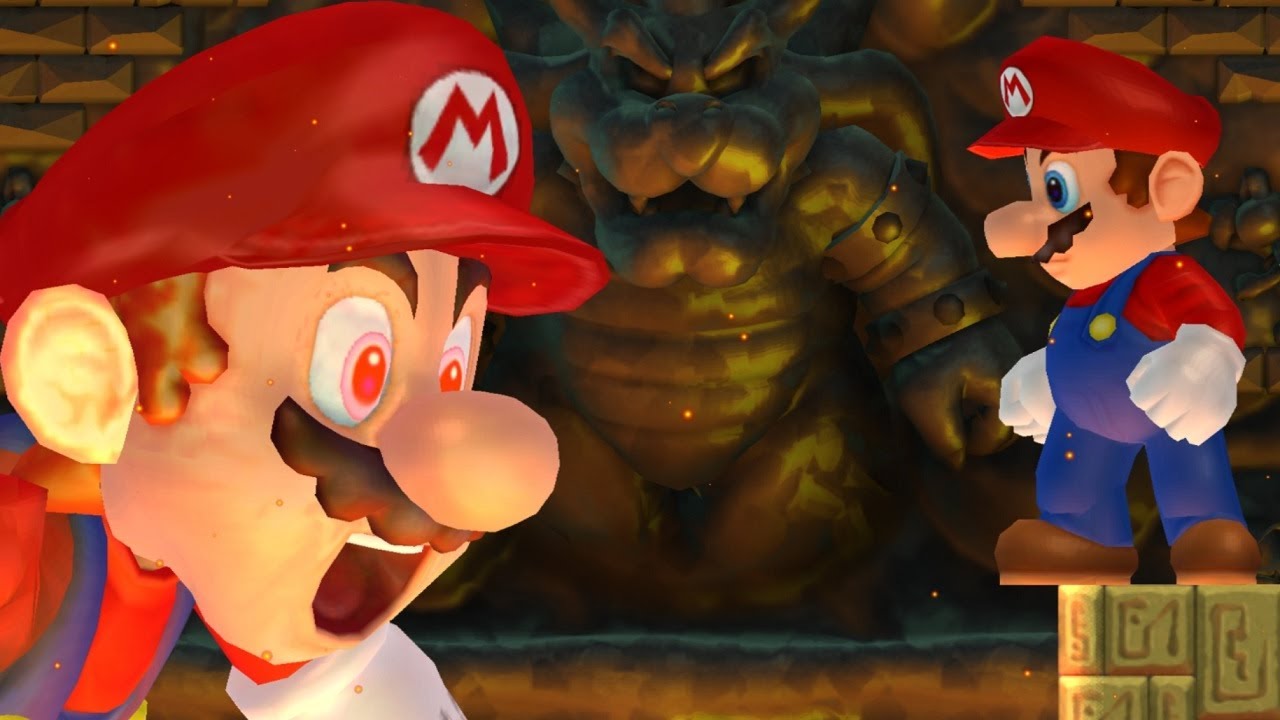 A 'low time' version of the intro played before underground and underwater levels. The timer doesn't count during this intro ergo this is unused. The song is split into two parts, as with all hurry variations and the latter ID is the actual song. Game Genie code ??C-C7B-19F will play the song at the main menu. It is also unused in the original game.

Early graphics for the 'Extremely Lucky' card. In the final version, Peach's face was touched up slightly, her earrings were repositioned, the 'EXTREMELY' text was redrawn and shifted up by one pixel, and the word 'LUCKY' was added.

A pre-release screenshot shows that other tiles were planned to be included, but these are not present in the final game.

A block with a very devious expression. It appears in place of some Challenge Mode, VS Mode, and You VS Boo objects if they are hacked into normal levels. Graphics for another frame located nearby suggest this block could also flip, possibly as a 'trap' for the player to fall through.

A flashing checkerboard tile. The metatile associated with this graphic is solid, with no special behavior. What purpose it would serve is unknown.

In all of the non-castle You VS Boo Levels, the areas after the flagpoles can't be seen in normal gameplay, as the victory screen shows up after Mario slides down the flagpole. They can be seen in-game by using this walkthrough walls code:

The unseen castle after the flagpole in World 1-1. Oddly enough, it lacks the windows on the top that all other castles at the end of levels in the main game have.

The unseen brick blocks and pipe after the flagpole in World 1-2. Since there isn't an inserted room pointer to the pipe's exit, hacking your way in order to enter the pipe will cause the game to crash.

The unseen castle after the flagpole in World 1-3.

The unseen castle after the flagpole in World 2-1.

The unseen pipe after the flagpole in World 2-2.

The unseen castle after the flagpole in World 2-3.

Mario Bros Deluxe How To Get Mini Mushrooms

The Japanese version was released eight months after the European one, and received a fair amount of improvements.

The photo album icon on the main menu got a flashing NEW! whenever there are new photos to view.

The sound that plays when the screen is scrolled by pressing Select or Up was changed in the Japanese version.

While the English versions start you as Small Mario whenever you restore a game, the Japanese version saves your current powerup. This opens up a bug where if you save at the right time while being hit and reload, you can end up as a small Fire Mario. Your current score is also saved on the Japanese version (it was reset on the English versions), making it easier to get a high score.

In the English versions, the Game Over screen asks you if you want to continue, and if not, if you want to save. The Japanese version has a single menu with Continue, Save, and End; if you opt to save, a large 'RANK IN!' starburst will appear if your score is high enough to get on the records table.

Speaking of which, pressing Start in the Japanese version lets you reset the high score table. The extra modes are also unlocked as soon as you hit 100,000 or 300,000, rather than the English versions' method of having to get a Game Over in order for your score to register.

The message presented after choosing to save on the pause menu differs between versions.

The point totals for getting the Score Medal were reduced in 14 of the first 16 levels (the exceptions being 2-3 and 3-4), and the score bar at the bottom of the screen fills to the new total.

In the English versions, pressing Select to switch between forms only lets you play as Mario or Luigi based on who you used last in other modes. In the Japanese version, the brothers are cycled through along with their forms, and even keeps track of your record time for each stage.

In addition, the print option has been completely disabled, and two of the pictures in the album are impossible to obtain without hacking.