The Audacitysound editor is an excellent application with many uses.Your author recently started working on a long-term project toconvert the better parts of his ancient vinyl phonograph recordcollection to FLACfiles so that they could be added to his digital audio library.Audacity was chosen to do the audio recording and processing work.

Prior to undertaking such a project, one must first assemblethe appropriate equipment.An older desktop computer with an Athlon 2500 processor and500MB of RAM was used for the computing platform.Besides a sufficiently powerful CPU, the second most importantpiece of hardware is a decent sound card. AnM-AUDIO Delta 44 was chosen.Standard sound cards should also work, but the Delta 44 hashigher quality A-D converters that are mounted external to thecomputer for lower noise.The Ubuntu Studio distributionwas used on the machine, although any current Linux distribution should work. 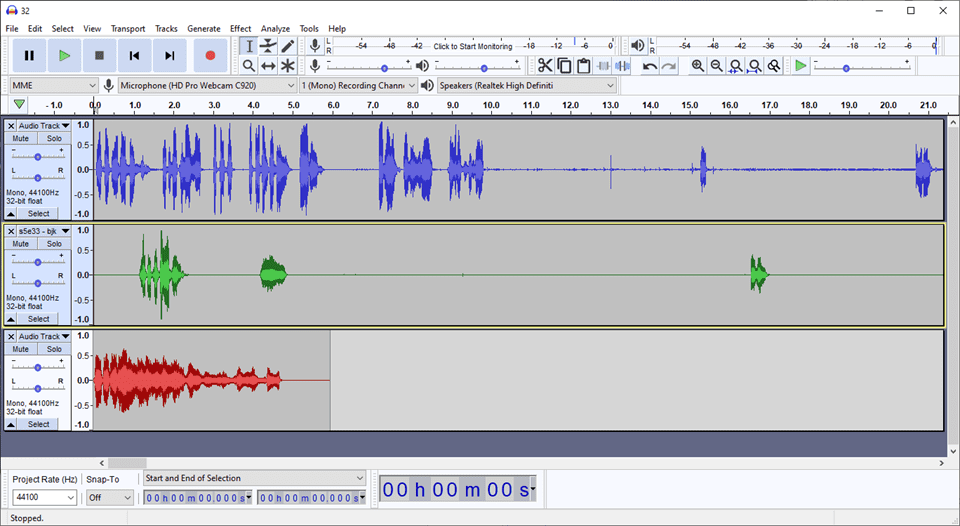 The turntable is an ancient Technics SL-D3 and a Pioneer SX-780 receiveris used as the phono preamp. One of the Tape Record Outputsfrom the Pioneer receiver is fed into the Delta 44 sound card withan appropriate set of adapter cables. The turntable's trackingweight, anti-skid settings and platter speed should all be adjustedappropriately.One of the new USB turntables could probably be used here if you don'talready have access to the legacy hardware.

The Audacity sound editor needs to be set up by entering theEdit->Preferencesmenu, the audio quality was set to 44,100 Hz sampling at 16 bits(standard CD quality). Depending on your needs, other sample ratescan be used. One of the more important configuration stepsinvolves making sure the Software Playthrough button in theAudio I/Opreference window is deselected. On this particular machine, enablingSoftware Playthroughresults in audible sample loss on the recording.Audio monitoring is done through the Pioneer receiver.The audio meter should be enabled on the mainAudacity window and the GNOME ALSA sound mixer is used to set thesound card input levels. The machine is now ready to record.

It is a good idea to make a few test recordings on various albumtracks to set the sound card's input level adjustment.A loud track should be played and the input level should be adjustedto achieve fairly high readings on the meter without any clipping.

Unless you only need to extract one track, it is best to record anentire album side in one pass. Recording should be enabled prior tosetting the needle on the record, and disabled after the needlehas been lifted. Be sure to use an appropriate record cleaneron the disc to get rid of any dust particles.

When an album side has been successfully recorded and the levels lookreasonable, it is time to do some trimming.Listen to the beginning of the recording with the volume up a bit,At some point the sound will probably begin with a fade in.Select the audiofrom the beginning of the recording, past the initial pop from theneedle landing in the groove, and ending a few seconds before thefirst track starts.Delete the selection with Edit->Delete.Next, select from the new beginning to where the sound begins.Use Effect->Fade In to make a smoothtransition from quiet to the beginning of the audio.Perform a similar edit at the end of the album side.Delete everything from a few seconds beyond the last sound to the endof the recording and put a Fade Out at the end of the side.

If your album has a few clicks and pops, now is the time to removethem. Select the entire recording with Edit->Select->Alland de-click with Effect->Click Removal. The default clickfilter settings seem to work fairly well.

The next step involves putting labels at the beginning of each song,assuming the album's material is not one long track. First, createa label track with Tracks->Add New->Label Track.Hit the << rewind button and type Control-B, this puts a labelat the beginning of the recording. Move through the album side andput more labels at the middle of each song transition. It is a goodidea to zoom in and put the label on a wave zero-crossing point to preventclicks at the beginnings of individual tracks.If you zoom in, you can often see a change in wave patterns that is leftover from the master tape splice.The recording should now look something like the first frame of theAudacity Images. 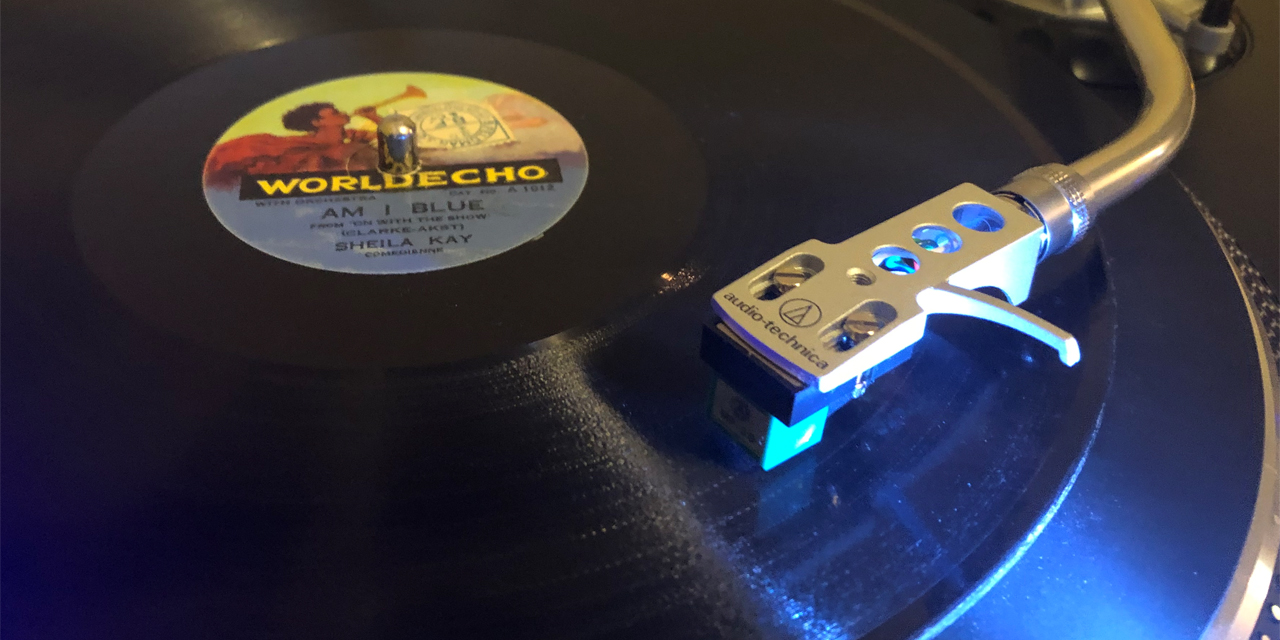 It is a good idea to listen carefully to the entire recorded album side.If the recording has any obnoxiously loud clicks and pops that weren'tremoved with the Click Removal step, Audacity can smooth them out.To smooth out a click, locate the offending waveformby playing and pausing, then zoom in multiple times until the click isvisible. Select a small region around the click (< 128 samples) anduse Effect->Repair to smooth out the waveform.Zoom out and play the area where the click removal was performed toverify the operation. Audacity is very forgiving, if you don't like the results ofthe click removal or make another type of mistake,Edit->Undo will reverse most operations.An example Repair operation is shown in theAudacity Images. 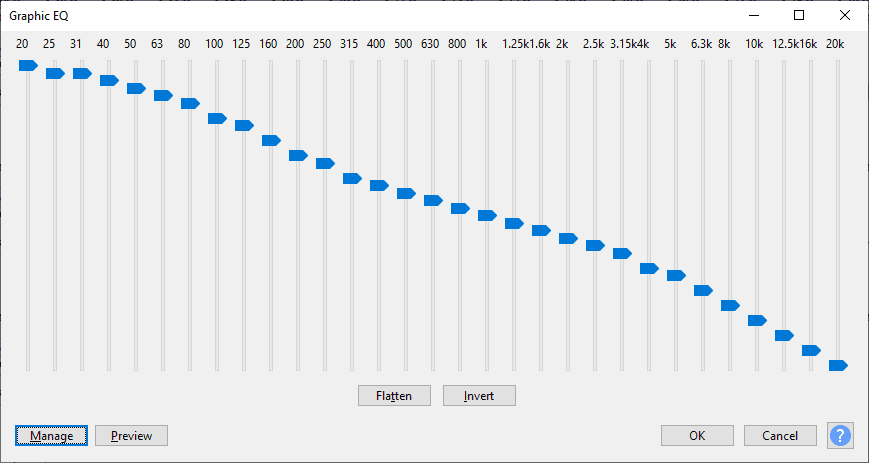 At this point, it is time to split the album side into individualaudio files. Select File->Export Multiple, chose thedesired export format such as WAV, selectSplit files: based on labelsand Name files: Numbering consecutively.Click the Export button and click Audacity will renderthe individual track files.Audacity can create .mp3 and .flac files at this point, or that canbe done at a later time.At this point, you exit Audacity and save any edit information ifyou think you will need to work on the recording later.

The same operations are performed on the B-side of the record.Your author likes to use a short BASH script to rename theAudacity-generated file names to his own name scheme.The track files are all grouped together in one directory,converted to FLAC format with the command FLAC *.wav.A meta-data text file is created with digitizing notes,track titles and any other information that you wish to save.Lastly, all of the files are played one more time to verify thatthere are no problems. The original album side tracks can nowbe safely deleted to reclaim some disk space.

With enough editing effort, it is possible to make a digital copyof a vinyl record that sounds better than the original.Performing all of the above steps on a large collection of albumsis a big undertaking, but the reward comes in turning a hard to playdiscrete music library into an easy to play digital library.

For furthur information on this topic, see thefollowup article.

You will first need a program which records audio and an audio interface. At the base level, the line/microphone inputs on your computer will function as the interface and, if you do not have a recording program, Pspatial Audio can recommend Audacity, a free, easy-to-use, multi-track audio editor and recorder which runs on the Mac platform (and, in fact, on Windows and GNU/Linux too). Audacity is free software, developed by a group of volunteers and distributed under the GNU General Public License (GPL).

Audacity features, not only the recording tools you need, but other tools which you can use to enhance your needle-drops like click and noise filtering and speed change. You can read about and download Audacityhere.

Stereo Lab applies equalisation to compensate for the recording characteristic of the audio stored on analogue gramophone records. To do this, the recording of the signal from the pickup must be unequalised when it is recorded onto the computer.

The signal from a gramophone pickup is too small to apply to the line input of most sound-cards or audio interfaces. Moving coil pickups can feed a microphone input, although a lot of gain will be required and this risks the introduction of noise. More common moving magnet cartridges may not feed microphone input directly because the signal is adversely affected by the low input impedance of most microphone inputs.

What is really required is a dedicated phono preamplifier to bring the small signal from the cartridge up to a healthy level for input to the computer sound-card. Many phono preamplifiers exist at all price levels from a host of manufacturers . The vast majority of the phono preamplifiers apply RIAA equalisation in the hardware of the unit and that is not what is required here. We need a preamplifier which provides gain and impedance conversion, without applying the equalisation. These are unfortunately quite rare. There are some very low-cost options which only work with moving magnet cartridges. And there are some other, high-end, units too; usually with 'flat' as an equalisation option in addition to RIAA and others. For other options, go here.

When recording the unequalised signal from a gramophone record, set levels in the normal way so that peaks are always several dB below clipping. There is no need to anticipate the effect of the RIAA filtering in Stereo Lab because the software will automatically adjust the level of the input file to give you best resolution in the processed file.

Recording sampling rate and bit-depth may be set according to your policy or taste. RIAA accuracy is maintained in Stereo Lab even at lower sampling rates by pre-warping the filter so as to preserve the top-octave which would otherwise be affected by the inevitable null which must exist in a digital filter at a frequency of half the sampling frequency. High sampling rates are not required for very good results to be obtained (and remember rates above 44.1 and 48kHz are not supported in Stereo Lab Home version).

Gain-Ranging ensures that residual front-end and ADC noise is over 40dB below surface noise on a brand-new vinyl record.

Because of their inferior signal-to-noise ratio compared with moving-coil types, Gain-Ranging is not suitable for needle-drops made with moving-magnet catridges; with the exception of the Phædrus Audio PHLUX active cartridge.

For all support issues, go here. 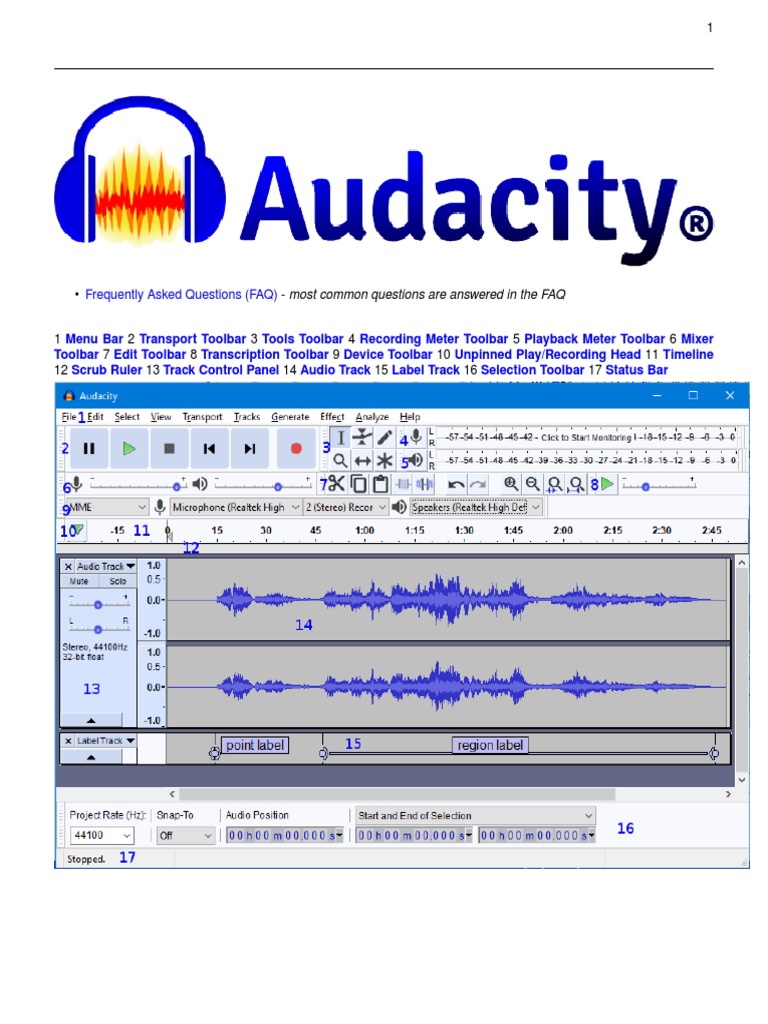 Export A WAV As A Raw Master Backup